"China is the world's locomotive... copper is its partner in development" 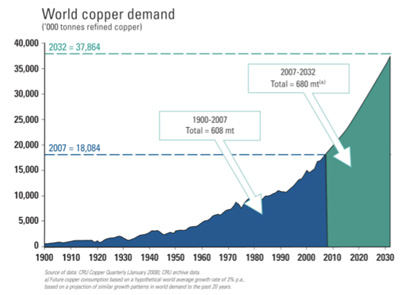 The outlook for copper is greatly focused on China. Copper consumption will grow as a consequence of overall economic growth. China has been a shining example of overall economic growth, growing at an annual rate of 9.9% between 1980 and 2010. Most forecasts do not have China slowing down anytime soon; the IMF predicts China's economy will expand at an annual rate of 9.7% over the next 5 years.

"Copper consumption estimates for China are being revised up. Huge spending on copper-intensive power infrastructure on the state grid in 'rural areas' will continue through 2012 (12 bn RMB). Beijing has also renewed the 'home appliance subsidy scheme' and is promoting electric cars, which are twice as copper-intensive as conventional vehicles." - Patricia Mohr, Economist, Scotiabank 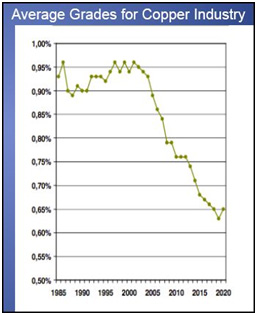 Spurring that growth are some key drivers: Overall urban population increases (by 2025, one billion people are projected to live in urban areas) and 221 Chinese cities will have over 1 million people (Europe has 35 cities with over 1 million people). Along with those massive increases, increased demand will be seen for buildings (5 million projected to be constructed by 2025) and transit (170 mass transit systems projected to be built- Europe has 70). Ultimately, whether it is more people, more buildings, or more infrastructure, more copper will be needed to facilitate construction.1

However, one of the largest drivers of copper will be the growth of the Chinese consumer. Now one billion Chinese have become consumers, salaries have increased, and domestic consumption will continue growing faster than GDP (which in itself is projected to grow 500% by 2025).2

More consumers, means more demand for: cars, appliances, garments, electronics. In fact China has set a goal of 65% urbanization rate by 2050. Over the coming 40 years that means 20 percentage points of urban growth per year, that translates into 300 million rural residents becoming urban residents over this time period. What does it all mean? More copper will be needed. Evidence of this can be seen in copper consumption figures between 1980 and 2010: copper consumption expanded at an annual pace of 10.1%.

India also provides a very compelling case for copper demand and one only has to look as far as their power needs. According to the International Energy Agency, India's power production needs to rise by 15-20% annually and to meet that, India needs to invest $1.25 trillion by 2030 into energy infrastructure. From this new infrastructure, India's annual copper demand is expected to more than double.

Chinese demand is not the only major factor to consider in the outlook for copper. The world is also beginning to feel the impact of supply challenges . When it comes down to the production of copper, the industry is experiencing difficulties from various aspects of the production cycle:

"The reason why the prices are holding up so very high is that there has been only marginal increases in new copper mine development over the past five years." - Patricia Mohr, Vice President Economics at Scotiabank Group in Toronto

The trends in global refined copper consumption are also progressing to an alarming state. Industrial production is not keeping up with copper consumption and recent indications have pointed to estimates in Chinese consumption to be very conservative. It now appears that in the next 25 years, the world will need to produce as much copper as has been produced in the history of humanity.3

"There is no question that the current production numbers are to some degree validating that there is an issue starting to manifest itself on the supply side." - Mark Liinamaa, Vice President of Market Research with Morgan Stanley

Further evidence of the supply challenges can be seen in the copper stocks at metal exchange warehouses. Declining grades in deposits, more underground mining operations (leading to higher costs of production), and discoveries in countries with political risk have lead to all time lows in copper stocks.